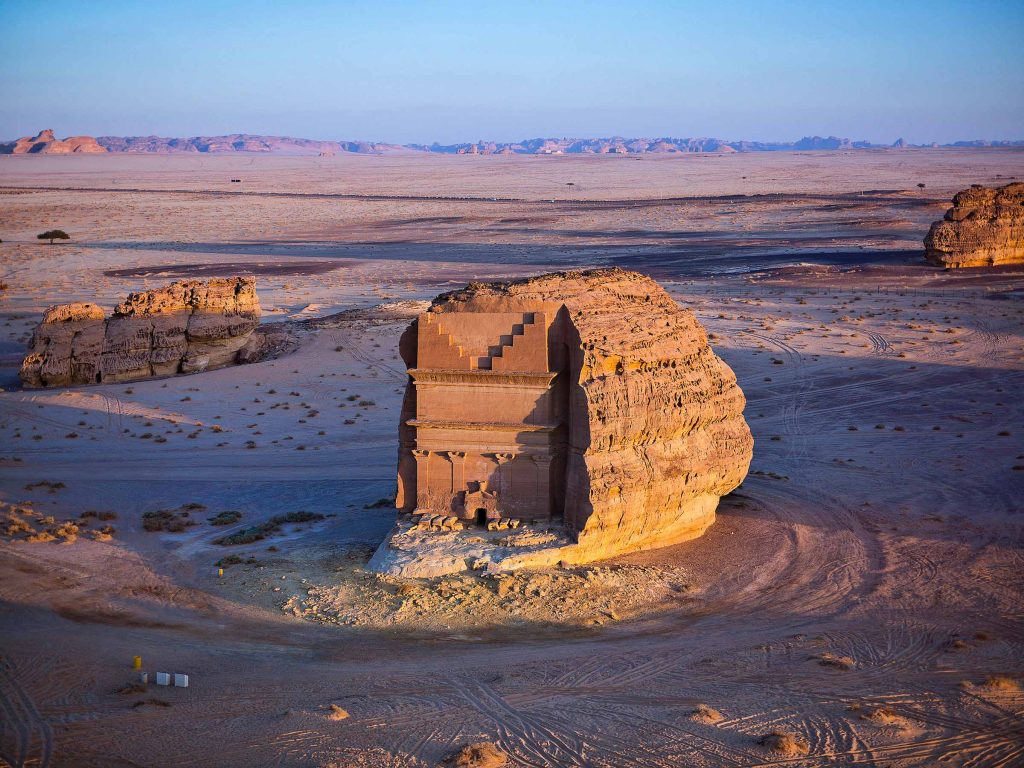 The Arab World Institute invites visitors to discover AlUla, one of the most significant archaeological regions in the world with its exhibition – the first event of the 2019 academic year.

A magical place where extraordinary landscapes meet: the AlUla region is an exquisite sight, from the deep green of the oasis to the ochre of the sand, from the red of the sandstone canyons to the black tones of the volcanic rocks. This enchanting setting, which is imprinted in the memory of all those who have visited it, also shelters the multiple and spectacular traces inscribed by generations of men and women attracted by the riches of one of the most fertile valleys of the Arabian Peninsula, for over 7000 years.

In AlUla, numerous societies and civilizations have followed one another: Neolithic peoples, kingdoms of Dadan and Lihyan, Nabataean civilization, Roman empire, Umayyad and Abbasid caliphates, Ottomans – their remains have been miraculously preserved to reach us in an exceptional state of conservation.

The “AlUla, Wonder of Arabia” exhibition introduces its visitors to this dual heritage, natural and human, with the help of rare archaeological objects and artefacts, digital, sound and sensory devices, all supported by exclusive videos by Yann Arthus-Bertrand. The exhibit offers an encounter with the exciting history of this unique place, as well as with its natural splendours. It is also a tribute to the most important archaeological work carried out over the past twenty years led by the two curators of the exhibition: the French archaeologist and epigraphist Laïla Nehmé and the Saudi archaeologist Abdulrahman Alsuhaibani. Their research has brought to light exceptional remains, some of which will be exhibited for the first time.

From the very beginning of the exhibition, Yann Arthus-Bertrand’s monumental images project the visitor into the majesty of AlUla’s reliefs and colours. Further on, there is a Nabataean funeral ceremony in a replica of one of Hegra’s famous tombs. where visitors can project themselves into the majestic atmosphere of this unique site – A UNESCO World Heritage Site comparable – in its scale and importance – to that of Petra in Jordan.

Monumental statues and numerous archaeological objects punctuate the exhibition and illustrate the richness of AlUla’s past. An inscription dated 280CE, a real missing link between the Nabataean and Arabic alphabets, is on display for the first time, demonstrating how AlUla offers a unique testimony to the birth of the Arabic language.

The exhibition ends with a guided tour of the old town of AlUla, inhabited for eight centuries by indigenous communities and by pilgrims journeying to Mecca, and gives a voice to the inhabitants, historians, teachers, storytellers, or farm owners, who are the custodians of this place, which is both historically charged and forwardlooking. AlUla today remains a vibrant place. Visitors to the exhibition will discover the daily life of the peoples who have occupied the valley over the centuries and up to the present day, through activities, but also through archaeological specimens, plants, traditional tools, photographs and contemporary testimonies. Indeed, the exhibition recreates the life of an AlUla garden, in the heart of which the visitor is invited to stroll around and soak up the local essences (moringa, date, fig…) through olfactory installations.

For His Highness Prince Badr bin Abdullah bin Mohammed bin Farhan Al Saud, Governor of the Royal Commission for AlUla, the exhibition is a unique opportunity to showcase the wonders of the site: “We are delighted that the first international exhibition dedicated to the inhabitants, heritage and history of AlUla is being launched at the Arab World Institute. A true crossroads between three continents and the former gateway from Arabia to the Mediterranean, AlUla is home to some of Saudi Arabia’s most important cultural and historical sites. This exhibition expands the global understanding of Nabataean, Dadanite and ancient Islamic civilizations and supports our mission to conserve the important heritage of AlUla for future generations.“

Jack Lang, President of the Arab World Institute, explained: “The Arab World Institute is delighted to introduce civilizations that have flourished in the amazing, lunar landscape of AlUla. A landscape, composed of mountains, hills and rivers, adorned with colors that change from morning to evening, where calm, silence, tranquility and mystery are intertwined. The exhibition we are preparing must be grandiose, in line with AlUla’s greatness. It will give you the opportunity to dream and will invite you to participate in a journey between heaven and earth in an exceptional place.”

The first confirmed occupation of the region dates back to the Neolithic period, when people settled in the valley and built funeral structures, including remarkable tombs. Drawings engraved on the rocks bear witness to ancient political and economic systems and abundant fauna (camels, ibex, ostriches).

From the 8th century BCE, AlUla became an important place on the famous incense road that linked the south to northern Arabia. Many ancient remains attest to this sumptuous period for the region. For more than a thousand years, caravans loaded with incense and myrrh from the kingdoms of the South stopped in the oases of Dadan and Hegra and established lasting trade relations with the present kingdoms.

Between the 8th and 2nd centuries BCE, the kingdoms of Dadan and Lihyan settled in the heart of the valley. They controlled the caravan trade, built sanctuaries and made spectacular human and animal statues.

About thirty kilometers north of AlUla, the city of Hegra was founded in the 1st century BCE by the powerful civilization of the Nabataeans, who came from present-day Jordan and were famous throughout the world for having built the magnificent Petra. From Hegra, the Nabataeans controlled the caravans heading for Petra, their capital. They had 94 monumental rock tombs with decorated facades dug into the rock. This unique complex is one of the treasures of the AlUla region, inscribed as a UNESCO World Heritage Site in 2008.

In 106 CE, Hegra became part of the Roman Empire and formed its southern border. The remains of a fort and Latin inscriptions bear witness to this Roman presence in Arabia, which is still little known to the public.

Thousands of rock inscriptions left by the populations provide information on the political and social organization of Dadan and Hegra between the 5th century BCE and the Arab conquest. These inscriptions, written in Dadanite, Minaeran, Aramaic, Greek or Latin, provide very valuable information on the pre-Islamic alphabets used in Ancient history. Research conducted at AlUla found that Nabataean writing had given rise to Arabic writing.

After the advent of Islam in the 7th century, and until the beginning of the 20th century, the incense route became one of the pilgrimage routes to the holy places: the Syrian route linking Damascus to Mecca. AlUla holds a special place within this. Pilgrims took advantage of this stopover, the last place with abundant resources, to obtain water and dates, and leave testimonies of their passage on the rocks.

Two new cities were built in the valley: al-Mâbiyât and the old town of AlUla. They ensured the safety of pilgrims and are mentioned in the writings of Arab travelers and historians, including those of the famous Ibn Battûta in the 14th century.

In the 16th century, the pilgrimage route was further developed with forts built in Hegra to protect pilgrims.

In 1900, he Hijaz Railway line was constructed alongside the route, an ambitious project that succeeded in greatly improving travel for Hajj pilgrims. In 1907, two of twelve stations were inaugurated in Hegra and AlUla, which were still necessary crossing points for pilgrims who now travel to Medina by train.