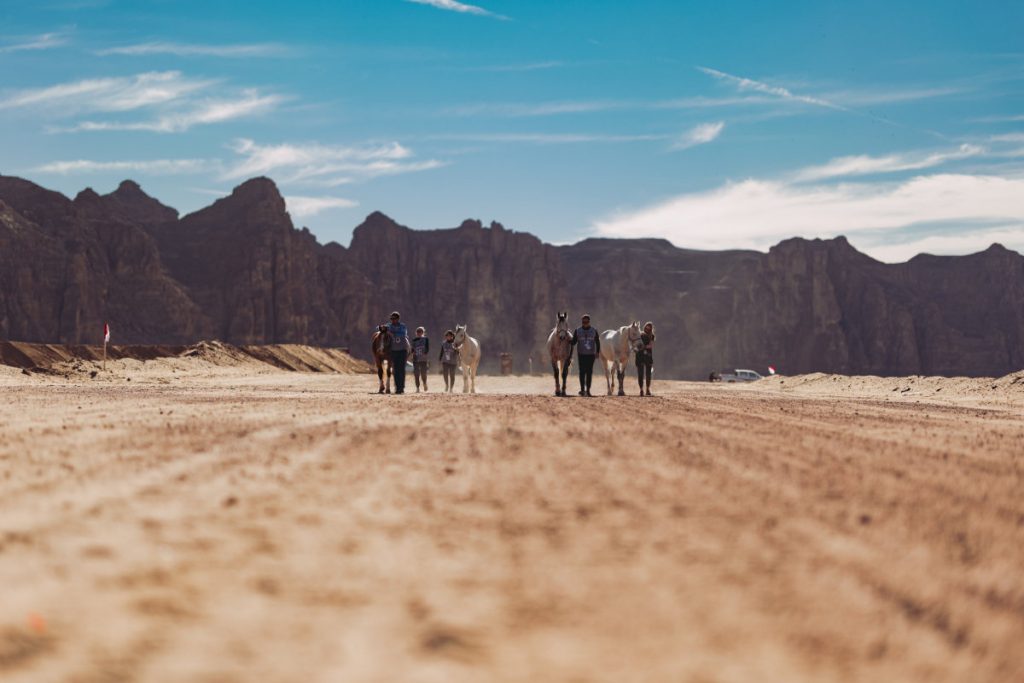 With 34 million inhabitants in an area of over 2 million square kilometers, Saudi Arabia is the largest country in the Middle East, covering two-thirds of the Arabian Peninsula on its own. A territory 4.5 times larger than France, which opened its doors to the world in 2019 and revealed previously hidden treasures like AlUla. This region, located in the province of Medina in the northwest of the country, is at the heart of the ambitious and modern development plan named “Vision 2030”, driven by HRH Crown Prince Mohammed bin Salman and implemented by the Kingdom since 2016.

Unique in the world, AlUla is a jewel the size of Belgium that holds more than 7,000 years of history in its hands. Its Nabataean necropolises, on the site of Hegra, listed as a UNESCO World Heritage Site since 2008, its rocky landscapes of red, ochre or brown sandstone depending on the brightness of the sun, its black basaltic plateaus, its canyons, its desert stretching as far as the eye can see, and its heart: the oasis city and its green palm grove… are all natural and cultural attractions that Saudi Arabia would like to make known to all.

The close collaborations and friendship which have linked France to Saudi Arabia for many years led the Kingdom to request the Hexagon to support its AlUla development project led by the Royal Commission for AlUla (RCU) in 2018. This program aims to develop the region while taking care to preserve its identity, its archaeological heritage, the environment and to meet the needs and expectations of the local population. An intergovernmental agreement was therefore signed to this effect on April 10, 2018, resulting in the creation of the French Agency for AlUla Development (AFALULA) in July 2018 as a privileged partner of the RCU to develop the attractiveness of AlUla.

“The AlUla project is very ambitious and exciting. When we created the agency, we started from scratch as a start-up. As the quality of the RCU teams is high, we have decided to hire the best to carry out our missions.” explained Gérard Mestrallet. “In this project, the issue also carries strong symbolism. AlUla is not only a testimony to the history and culture of the Saudi people, but also a mark of the accelerated transformation of the Kingdom’s society and economy as envisioned in the “Vision 2030” plan. It is therefore a source of great pride for the agency to be able to participate in this co-construction of AlUla for international tourism and to share an unprecedented human adventure”.

The horse, one of the foundations of the AlUla project

The horse, and more particularly the Arabian thoroughbred, which originated in the Arabian Peninsula and is considered the oldest breed, is closely linked to Saudi history and culture. For 9,000 years, according to archaeological discoveries, it has been a real passion. The father of all horses, the Arabian thoroughbred, nicknamed the “prince of the desert” because of its elegance, its robustness and its adaptation to the arid climate, occupies a predominant place in the life of the Saudis. They celebrate its nobility in beauty contests and its physical qualities in equestrian competitions or horse races. The Kingdom is even very involved in the development and preservation of the breed.

“The project has included an element about horses because of their central importance in the history of Saudi Arabia. Remember that after Mohammed, the Arabs managed to conquer Mesopotamia, Persia, the Mediterranean basin and even Poitiers thanks to horses. Initially, we had planned to dedicate a museum to them among the nine planned in the project. But through discussions with experts and researchers, we decided to develop and organize this museum into five pavilions spread over an Arabian thoroughbred farm. Therefore, we are going to create a space dedicated to the history of the Arabian horse in AlUla, a second one dedicated to its history in Saudi Arabia, a third one on the breed, a fourth on its place in the arts and a last one on Furusiyya, the culture and art of chivalry in Arab countries” explained Gérard Mestrallet.

Antoine Sinniger, a specialist in the equine industry and former General Manager of the Pôle International du Cheval in Deauville, joined the AFALULA agency in December 2020 to take the reins of the horse division. “We quickly set up a working group made up of members of the RCU as well as Princess Dilayl Bint Nahar Al Saud, an international show jumping rider. This working group is controlled by a committee made up of Princess Dilayel, herself vice-president of the Saudi Federation, Prince Abdullah Al Saud, president of the Saudi Equestrian Federation, the assistant to the CEO of the Royal Commission, Abeer Al Akel and Gérard Mestrallet.  The strategy of the horse pole is focused on the development of equestrian activities in favor of tourism and local population.” said Antoine Sinniger.

Two equestrian villages will be built in AlUla. The one in Al Motadil, the transformation of which will begin in 2022, will be reserved for sports competitions. It will include an equestrian arena, a platform for endurance, the “queen” discipline of the region, ultra-modern infrastructure for horses, a veterinary clinic, riding arenas, polo fields and, eventually, a racecourse and hotels. This site was chosen because it has already hosted renowned international competitions such as the third edition of the “Fursan Endurance Cup”, an international endurance race of 120 km in the desert (January 29) or the second edition of the “Richard Mille AlUla Desert Polo” (February 4 and 5) which brought together the best polo players in the world.

The village of Al Atheeb, about 10 km from Al Motadil, will be dedicated to culture, training and recreational equestrian activities. In particular, there will be a riding school for the local population and tourists, a training center for riding teachers and other horse-related professions, as well as equestrian tourism guides, farriers, grooms, and security rangers… a horse museum with five different pavilions and hotels, one of which will be built near the mare farm and around the museum. Al Atheeb will also be the starting point for the horse riding routes, and the working group is considering the creation of a Furusiyya academy, a local discipline that is largely inspired by the use of horses.

The transformation and development of the two equestrian villages has begun, and the equestrian structures at Al Motadil are expected to be operational for the next Fursan Endurance Cup in 2023. At the same time, AFALULA is working to structure the Saudi equine industry along French lines, both in terms of institutions and the organization of equestrian activities. “We want both sites to be able to offer activities throughout the year. We are already thinking of hosting a show jumping tour lasting a few weeks, like those organized in Wellington (USA) or Oliva (ESP), for example, but also continuing education, seminars, a tour of equestrian shows…” Gérard Mestrallet said, before concluding, “The Saudis are very enthusiastic and receptive to all our proposals for developing equestrian activities, which must absolutely respect the well-being of the horse and guarantee good practices, and they are very vigilant about this. This is a clear condition which is at the heart of all projects dedicated to the horse”.