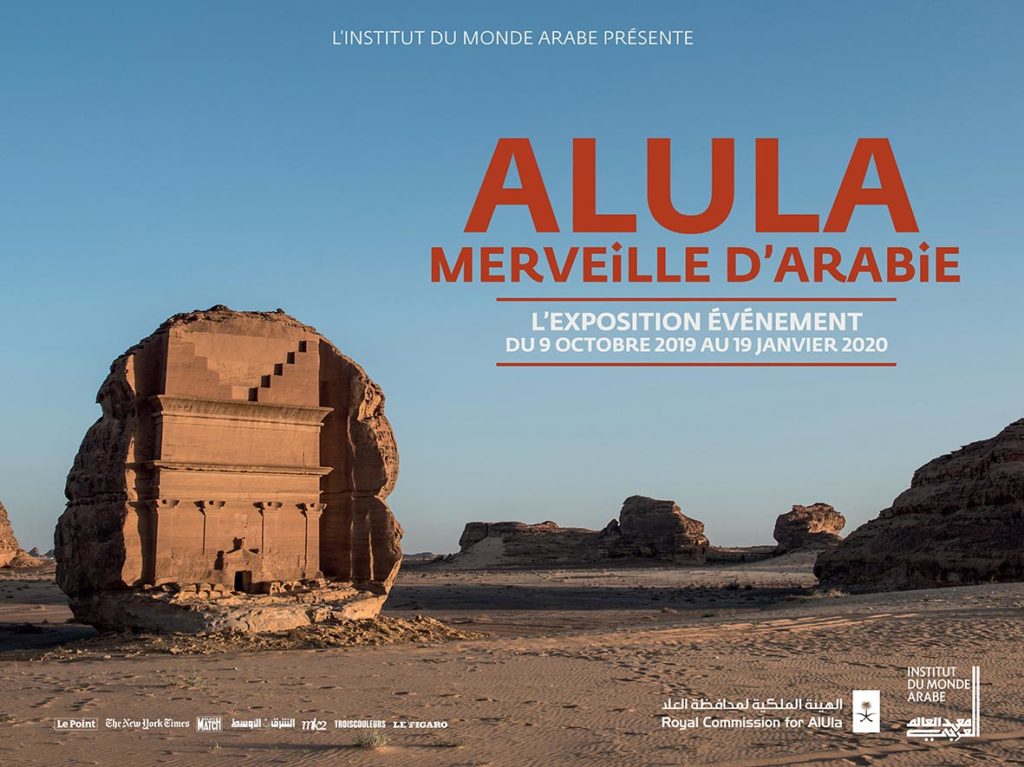 – AlUla is a historically significant desert oasis in the north west of Saudi Arabia.
– AlUla, Wonder of Arabia is the first major exhibition to present AlUla’s spectacular nature, archaeological treasures and cultural heritage, taking visitors on a journey through time spanning 7,000 years.
– The Royal Commission for AlUla has announced its Cultural Manifesto, pledging to reinvigorate AlUla as a vibrant, open museum through conservation and developing a unique global destination for heritage, nature and the arts.

The exhibition is an international collaboration between The Royal Commission for AlUla and the Institut du monde arabe, led by its President Jack Lang. It is supported by the French Agency for the Development of AlUla (AFALULA), led by Gérard Mestrallet.

Inspired by the pioneering explorers and archaeologists who came to AlUla to discover and interpret its ancient civilisations, the curators of the exhibition, Doctors Laïla Nehmé and Abdulrahman Alsuhaibani, have worked tirelessly to present AlUla, Wonder of Arabia to the world.
The exhibition introduces visitors to AlUla’s spectacular natural beauty and rich cultural heritage through the presentation of rare archaeological objects, immersive multimedia and visuals by renowned photographer Yann Arthus-Bertrand.

To highlight its significance as a global destination, the Commission is using this occasion to launch its Cultural Manifesto for AlUla. The Manifesto sets a clear direction for the long term development of the region, articulating the Commission’s commitment to sustainable and responsible tourism across what will effectively be a vast open-air cultural experience, enabling exciting journeys of discovery.

The diverse and truly wide-ranging cultural development in AlUla will embrace heritage, nature and a bold mandate for art and cultural production helping to drive a new creative economy in the region.

The Manifesto prioritises the preservation of the region, its history, and the development of skills for current and future inhabitants of AlUla – custodians of AlUla’s past, and at the centre of its future as a dynamic economy and society and as a world-class destination.

Among the many new visitor experiences to be developed are the Black Basalt Museum – taking its inspiration from AlUla’s volcanic rock formations; Wadi AlFann – the Valley of the Arts – an ambitious collection of contemporary commissions and sculpture set in AlUla’s extraordinary landscape and the Hegra Museum – exploring the life and legacy of the Nabataeans who established their principal southern city in the Kingdom.

Located in northwestern Saudi Arabia, and serving as a crossroads between East and West, AlUla has been built by successive societies and civilisations over millennia. The exhibition will take visitors on a journey through the natural and historic wonders of this region by immersing them in AlUla’s unique landscape and the ancient North Arabian Kingdoms of Dadan and Lihyan, and the Nabataean city of Hegra, Saudi Arabia’s first UNESCO World Heritage Site.

The essence of AlUla is the interrelationship between heritage, art and nature. The opening of this exhibition together with the launch of the Cultural Manifesto of AlUla acts as a landmark invitation to the world, to preserve our global heritage, balance ambition with responsibility and deliver the next layer of our story, for future generations to treasure.

Gérard Mestrallet, Executive Chairman of AFALULA, the French Agency for the Development of AlUla, said:

The Cultural Manifesto provides an unparalleled opportunity to write a new chapter in the history of AlUla and its people, based on a sensitive and credible cultural development of this unique region as a place of heritage for the world. The intergovernmental agreement signed in Paris in April 2018 between France and the Kingdom of Saudi Arabia, will reflect this spirit and ensure that AlUla welcomes the world, and the world welcomes AlUla in the years to come.

Launching such an ambitious invitation here in Paris, an international city of arts and culture is a strong symbol of openness and universality. AlUla is a once-in-a-generation project, and the key to its success is collaborative work and cross-civilizational dialogue, to which we are deeply committed and why the IMA is enormously proud to be hosting this exhibition.