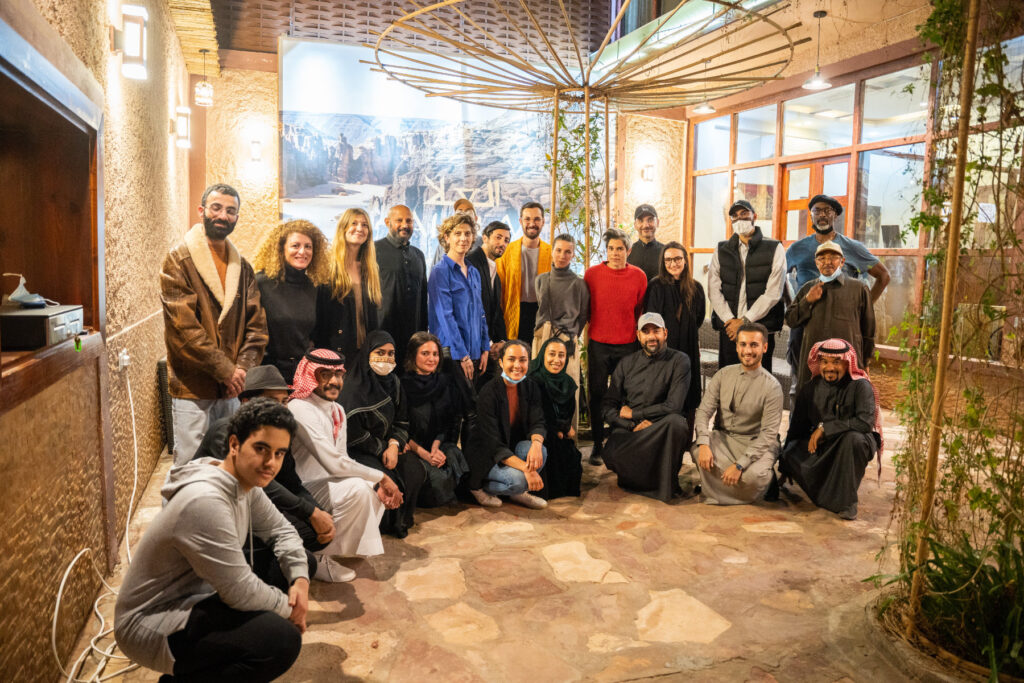 After eleven-weeks of exploration and experimentation, the first AlUla Art Residency programme, under the theme of ‘The Oasis Reborn’, has successfully concluded this weekend.

During three days of open studios, artists’ works – ranging from experimental sculptures to large-scale site specific or multimedia installations – were displayed in Mabiti AlUla and its surrounding palmgrove, inviting visitors to immerse themselves into the historical and cultural oasis of AlUla.

The artworks of the artists will also be displayed at the occasion of AlUla Arts festival taking place in AlUla from February 13 to February 26, 2022.

Following eleven-weeks of exploration and experimentation six artists in residence have revealed their works in response to the cultural oasis in three days of open studios at the artists base in Mabiti AlUla.

Centred on the theme ‘The Oasis Reborn’, the artworks have been inspired by collaborations with technical and scientific experts and the local community, including artisans and cultural practitioners – giving artists dynamic insights into one of AlUla’s most prominent and storied landscapes. These perspectives have been regularly shared with the public throughout the residency, including 14 workshops & talks, 7 artists public programmes, 12+ site visits and 20+ expert interactions in 11-weeks.

During the three days celebrating the closing of the AlUla Art Residency, a dynamic public programming featured the six prominent artists work, through their creation and research, to the AlUla residents and community of experts, giving a fresh look on how to give a new lease of life to the oasis and to make sure it is connected to its fabled history and future legacy.

The final artworks of the engaged artists will be exhibited to the public during the AlUla Arts festival from February 13 to February 26, 2022.

Recalling a past that now seems far away, Rashed AlShashai’s Thuraya reflects on links between our present — one that is supposedly witnessing unprecedented scientific progress — and the ancient worlds. Through a conceptual approach, the large-scale site specific installation combines the history and the nomenclature of things and the environmental materials of the oasis that dwellers have used to make furniture pieces for daily life.

The Oasis is a Wadi Raised to the Sky developed by Sara Favriau in AlUla takes three forms, three distinct steps corresponding to three related moments: small sculptures “Les Petits Riens” (“Trifles and Trinkets”), a filmed performance “Un jour sans fin” (“A Never-Ending Day”) and an installation “Ruban de Möbius” (“Möbius Strip”). These three forms question the notion of garden of the desert, and particularly of the oasis – our planet is a vast garden, after all, and the realms of the human and the animal are one.

Through a process of locating, sharing and collecting narrative, Talin Hazbar’s Earth Readings explores various relationships between the past and the present, the imperceptible and the material and focuses on map-making and mark-making narratives to embody the materiality and meaning of the land.

As a ritualistic catafalque, Muhannad Shono’s On this Sacred Day represents the cycle of death and renewal unfolds amongst the living oasis. From the smoke that rises are stories of comings and goings, loss, and remembrance.

Analysing the oasis as a motherly environment nurturing human presence through time, Sofiane Si Merabet’s It’s Not Early Anymore establishes a parallel on the recent development of the oasis of AlUla and the excitement around wedding celebrations. Both being rhythmed by seasons and affected by human actions, the idea of celebrations and the lifecycle of the palm tree as observed in the oasis are explored in this multimedia installation.

We believe culture is indispensable to our quality of life, and we are successfully spearheading an environment which supports creativity, unleashing new and inspiring forms of expression that will interact with AlUla’s residents. Embracing the landscape and surroundings, the AlUla Art Residency programmes are a key aspect in the long-term endeavour of nurturing a flourishing creative industry and cultural economy in AlUla, marking the beginning of a destination inspired and built by and for artists and arts professionals. It is a continuum of AlUla’s legacy as a living oasis for art.

We are delighted to unveil the research and work of the first artists in residency in AlUla. Through a variety of mediums and approaches, hand in hand with experts and the local community, they are offering a fresh outlook on the revival initiatives currently being deployed in the oasis. With this programme, we are calling upon contemporary creation to pay tribute to the beauty and significance of AlUla while also contributing to the development of the destination through art specific intelligence.

“The first edition of the AlUla Art Residency is the beginning of a story, creating a long-term link between artists and AlUla’s local community. It already transcribes in their work restitution as the six artists got time to be thoroughly involved and to collaborate with local artisans and experts of AlUla. We hope it will impact on their own practice, drive their future works while having a significant effect on AlUla’s urban overall transformation.”

It is always AlUla / not Al-Ula

For the Royal Commission for AlUla
Public Relations Team
publicrelations@rcu.gov.sa