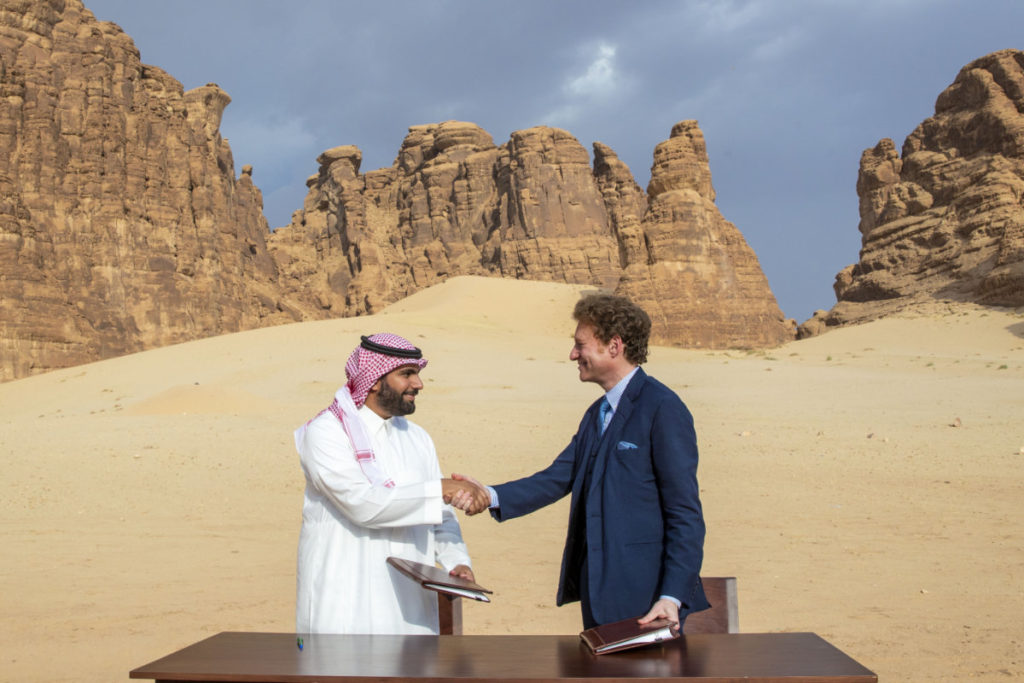 The signing ceremony was held at Ashar in the heart of AlUla county and signifies RCU joining The Global Alliance for Wild Cats with a commitment to invest $US 20 million over the next 10 years to conservation measures, with a focus on the critically endangered Arabian leopard, which is indigenous to AlUla.

Both the RCU and Panthera share a deep-rooted passion for conservation and are committed to working together to champion the revitalisation of the Arabian leopard.

This will be achieved through several initiatives including the establishment of a global fund focused on the protection and enhancement of remaining wild populations, captive breeding programmes, international collaborations, community-based conservation projects and scientific research to support the future of this rare species.

The Arabian Leopard Initiatives (ALI) that will be at the heart of the agreement with Panthera are fully aligned with the objectives of the RCU Charter and its goals to deliver a sensitive and responsible transformation of the AlUla region and its unique constellation of heritage, nature and art.

Commenting on the importance of the new agreement, His Highness Prince Bader bin Abdullah bin Mohammad bin Farhan Al Saud said: “The signing of the agreement is a major milestone in our shared ambitions to reintroduce the Arabian leopard population in the region and join global partners to support the preservation of these wild cat populations worldwide. It is our duty to protect, conserve and build the population numbers to preserve the species from becoming a footnote of history.”

His Highness continued, “Our partnership with Panthera will help ensure that populations in other countries around the world are preserved before they reach the levels of endangerment faced today by our precious native big cats.”

RCU CEO, Amr AlMadani, also thanked Panthera Chairman Dr. Thomas Kaplan and CEO and President Dr. Fred Launay for their personal commitments to the conservation of the Arabian leopard and for making journeys to AlUla to see for themselves the nature conservation efforts underway in the county:

This agreement would not be possible without the enthusiastic and passionate support of Thomas and his team at Panthera. Working together we will create a global fund for the preservation of the Arabian Leopard that will both support captive breeding programmes and their careful reintroduction into the wild. The skills and expertise of the Panthera team will place a crucial goal in achieving our shared ambition.

Panthera Chairman Dr. Thomas Kaplan commented: “The Arabian Leopard Initiatives (“ALI”), announced by The Royal Commission for AlUla (“RCU”) under the leadership of its Governor, His Highness Prince Bader bin Abdullah bin Mohammad bin Farhan Al Saud, are a testament to the power of individuals to alter the trajectory of a species – away from extinction and towards rebirth.”

Dr. Kaplan continued, “I am particularly grateful that the RCU has not only chosen to invest in bringing back the Kingdom’s own leopards, but has also joined – together with Indian, Chinese, Emirati, and American partners – in Panthera’s Global Alliance for Wild Cats. This constitutes a truly exceptional act of environmental statesmanship in this day and age. I applaud such visionary leadership and urge more governments to follow in their inspired path.”

In his concluding remarks at the agreement signing ceremony, RCU CEO Amr AlMadani added: “Being able to create a future where magnificent Arabian leopards can once more roam freely within the Sharaan Nature Reserve we are developing is one that we cannot wait to see.  Such a beautiful natural landscape as AlUla is a fitting home for some of the world’s most magnificent animals.”